With SJAA.  Pinnacles was fun! It sure was cold, but we all seemed to have dressed for it. Unfortunately there was some moisture in the air so transparency was not better than average – SQML didn’t get above 20.90 but nonetheless I filled my notebook with observations. I like the site pretty well: it’s very accessible.  On the downside one needs to shield one’s eyes from the occasional passing car and bring an eyepatch to preserve one’s dark adaptation in the lit bathrooms. It was fun meeting the names from the emails and share views. Here are a few of my more memorable observations, in my 20”:

NGC 3172, “Polarissima Borealis”: This is a spiral galaxy in UMi which has the distinction of being the closest NGC object to Polaris, less than 1° away. It’s an otherwise unremarkable tilted spiral, small and fairly bright with a stellar nucleus. I noticed it on my way to…

IC 3568, “Lemon Slice”, a planetary nebula with a bright disk, a dim central star almost lost inside, and a faint shaggy outer ring surrounding the disk. There is a faint star just on the edge of the western halo.

HDW3, highly evolved & dispersed planetary nebula in Perseus. Impossible to see without an OIII filter. Extremely faint and large, with a diffuse / irregular edge. Many faint stars in the field.

NGC 891, galaxy in Andromeda. Very long 5:1 edge on, nearly spans 0.5° FOV at 205x. A prominent dark lane runs much of the length, visible direct vision but really pops out with averted vision

NGC 1618, 1622, & 1625: Very cool string of three nearly edge on spirals arrayed near Nu Eridani. I thought Nu’s brightness would hurt the view, and while the galaxies were somewhat brighter with Nu out of the field, it was still a pretty arrangement to see these so close to a bright star.

Barnard’s Loop: Using 2.1x42mm Vixen binoculars fitted with H-Beta filters, I had a try to find the large faint nebulosity around Orion when as it neared meridian. The constellation fit the FOV from head to foot and more, and at first I could not see the loop. Then I could trace a “C” shape of faint milky wash extending from between the belt stars and Betelgeuse back and around to the Sword. Once seen it was obvious to me and I could pick it out easily. M42 appeared as a lumpy bubble. I could not quite make out the head nebula, it was merely sensed, being a slightly lighter dark than the dark sky. The Rosette was easy and bright. I look forward to trying these again on a better night.

Hands down, though, the sight of the night was the Trident missile test just after dark. As we were all setting up I happened to look up at a bright triangular cloud. It had a long central tubular blue-green glow, and a bright point which was moving! “What the heck is that!?” I called out, “up in the sky!” We soon realized it had to be a rocket launch, I assumed from Vandenberg Air Force Base. It was very strange how large the cloud lasted, and how wide it had become. Gary had the presence of mind to train his telescope on the missile itself and tracked it as it headed west. It was the most remarkable sight: a spinning point with swirls of light spinning out from it, like a dual-ended sprinkler, spinning fast. I could see pulses coming off it. Gary explained these were to make the rocket spin as it traveled. As it happens, this was the official “first light” object of Gary’s 15” dob – quite an object indeed! The triangular cloud dissipated slowly, and after 20 minutes there was still the long blue-green glow in the sky. Amazing. In the back of my mind I felt reassured there was only one rocket – more of them would have spelt trouble.

An SJAA member took this photo: 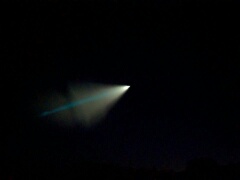