The night of 24 September I observed from my back yard in Fremont, CA with my 8” f7.25 reflector. Bands of mackerel altocumulus cloud were running overhead; they moved deceptively quickly and were fun to watch, illuminated as they were by a 10th day waxing gibbous (82% illuminated) moon. My agenda for the night was to observe some carbon stars in Pegasus and Andromeda. Transparency was obviously poor, but seeing was surprisingly steady, Pickering 7 and even 8 at times.

My favorite activity while observing the moon is to scan along the terminator and watch for all the interesting shadow patterns and the lit ridges and peaks which float or sometimes entirely disconnect from the rest of the lit surface due to the low angle of the sunlight. It was a lunar morning, and just as here on Earth, peaks and ridges (crater walls) were illuminated by the rising sun, while the slopes and crater floors were in shadow. I easily imagined a tide of darkness flowing into bays and channels along a jagged coast. It had mostly cleared from earlier in the night.

The moon bore high magnification well; I settled in at 368x (0.6 exit pupil, 0.3° TFOV), with an occasional atmospheric ripple but not at all distracting. I soon found a very wide “bay” filled with darkness and traced the ridges of the crater, which had several small craters along its ridgeline, and an interesting hooked crater along a part of the base. Then, in the darkened area I noticed two bright points – the peaks of what must be mons inside the crater. I continued scanning around the area and after a few minutes looked in the dark space again, and this time I saw an elliptical wash of faint light in between the two points. I could only describe it as if it were a galaxy: a 3:2 elliptical glow of even surface brightness, dim, closer to the bright point to its lunar east, and followed by a second bright point to the lunar west, a little further away.

This was interesting! The elliptical glow was not there 10 minutes before. I don’t think I was seeing more because of better dark adaptation as would happen with a DSO – this was the moon, after all, and even with a filter in place my eye carried an afterimage – the view in the eyepiece was brighter than my nighttime surroundings. I watched more. The wash of light began to reveal an extension on its eastern side; it now appeared like a mittened hand reaching to grasp the closer point. I ran inside to get my Atlas of the Moon by Rukl. I identified the crater was Schickard, as the ridgeline craters and the curved crater matched my view and the atlas (plate #62). I made some sketches. The “wash” was centered at approximately 53°W 45°S. I believed I was witnessing the slightest angle of light of the lunar morning illuminating features which happened to be at the right elevation to catch the light.

At about 10:30pm I noticed more changes: two smaller washes appeared to the lunar north; the one to the northeast of the first wash was closer than the one more directly to the north. My astonishment was taken to greater heights. At 11:00, it was time for bed; I had to go to work early Friday morning, and besides I was about to lose sight of the moon behind some trees. Luckily I was able to get a fairly decent snapshot of what I was seeing with my phone: 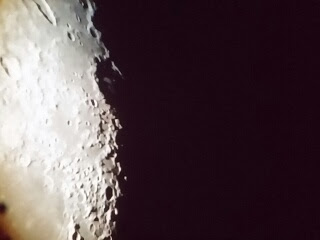 This morning I found a very good photo of the crater on line, and in it I was able to locate the two mons in the same orientation as my sketches. It’s not very clear in the photo but it appears the floor of the crater bulges out – is there a plateau running between, or is it just the curve of the moon?

I also found a topographic map from USGS. Unfortunately it doesn’t show the elevation to a fine enough scale to differentiate a plateau (I was hoping it would be like a topographic map one uses for hiking here on Earth). So I don’t know if it was because of their elevation, or just an accident of the varying height of the crater wall causing light to slip through and illuminate these areas, or what.

Curious to know whether others have observed this, I found on http://the-moon.wikispaces.com/Schickard that “Clair-Obscur effect: when the morning-terminator runs at 54° or 55° West there's an Equilateral triangle of 3 illuminated dots at the northeastern part of Schickard's nocturnal floor (observed by Danny Caes during the night of march the 30th, 2007, through the 23-cm Cooke/Steinheil refractor of Ghent-Belgium).”

I may have observed two of these dots, but I did not notice a third—though I think I was in the southeast area of the nocturnal floor? The observation does not mention the washes I describe; so perhaps I saw something new? In any case, this citation led me to learn what a Clair-Obscur effect is: usually short lived plays of light and dark on the moon’s surface. https://the-moon.wikispaces.com/clair-obscur.

We mostly notice the night-to-night changes on the moon as it runs through its phases. Nonetheless the moon is constantly moving, sunlight and shadow slowly traversing its surface. It ought to be possible, at the right angle and at the right elevation, for a feature to become illuminated over a short period. If anyone out there is a lunar expert or knows how to get in touch with one, I’d love the help to try and further validate this observation.