Having observed the prior night at Willow Springs I was happy to have the chance to go to Dinosaur Point the following evening.  Dino was being opened by Jamie Dillon on TAC; I wanted to go partly to cultivate a friendship with him and anyone else going. I wanted to observe from the site to make sure it was a good option during the rainy season. I was able to have a couple of short naps during the day, and I was surprisingly awake for the evening.

I arrived at around 6:30 and parked in the lot. Jamie and David C. were already there. Mark from Santa Cruz showed up a short time later. Jamie convinced me to set up my 20”, and I told him the story of how I found the chassis on Craigslist and rebuilt it. He complemented the movements etc.

After set-up and during the sunset I ate some dinner (jambalaya, French bread, and Gouda cheese bought from Safeway on the way down). Jamie noticed columns of midges swarming up from the tops of the oak trees all around the parking lot. They looked like streamers being blown up from the trees, and they made a strange soft buzzing sound. It was a wonderful sight, they must have been settling in for the evening. 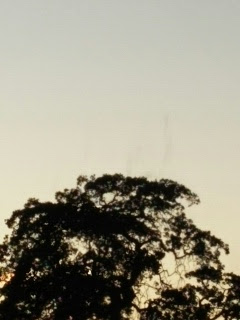 As I began to observe I could tell the scope was not cooled. It’s a problem; I often see bloated and shaky stars. I also wonder if the fans are causing vibration affecting the image. I viewed objects at random using my atlas, not having any plan in mind. I found interacting galaxy group Hickson 88 and called Jamie over. I saw four faint cores of which two were in the middle of a line; it turns out the two are condensations within one galaxy. Jamie pulled out Uranometria and confirmed three galaxies were in the group.  The next day on Aladin I found there is a fourth member a little separated from the line of three and dimmer, which is why it probably didn’t show in Uranometria, and why I didn’t notice it. I need to pan the eyepiece around a little more to catch such objects.

David had what think was a 6” AstroPhysics Starfire, a very excellent telescope. I looked through it later in the night when he had framed M31, M32, and M110 in the same FOV. It was pretty, to be sure. I looked through Jamie’s 10” Discovery dob, which put up very beautiful star images. He was showing a cluster in Cassiopeia that looked like a small flight of geese. The cool thing, as he explained, was these stars are in the Perseus arm of the Milky Way, which is one arm over from the Orion (where most of the stars we see reside). Mark remarked, those are really bright stars we’re seeing. Jamie is a passionate guy, and delights in the astrophysical aspects of the objects we see.

Clouds started moving in around 10pm from the north and transparency was never very good. We looked through holes to the south and northeast until about midnight when we decided to pack up. The lights from the Los Banos dam were not terribly bothersome, but there was some haze which reflected light into the sky and didn’t help. Best reading was 21.00 SQML pointed south. I think the site is ok but actually not much better than Henry Coe; so if I have a choice I may as well go to Henry Coe since its closer.
Posted by Mark McCarthy at 9:58 PM