I’ve seen the Lunar X, and the Lunar Y, and Huygens’s Sword. Last night another image presented itself to me, which I’d like to call the Lunar Eagle.

I was out the evening of 10/20/15 at 7:30pm, scanning the shadowed and lit edge of the moon as I usually do. 12.5” f/7 277x on an equatorial platform. Seeing was average and transparency poor, with thin fog blowing past the moon making it look like it was sailing through a cloud. Huygens’s Sword was nice, with Rupes Recta casting a widening shadow along its length. I came upon the area of Mare Imbrium and followed the Montes Apenninus which I suddenly noticed what looked like an eagle perched atop the mountains, near crater Eratosthenes. On Rukl this is plate 21, 16° N 6° W.

The “eagle” was facing forward, and had two deep black eyes, a bright beak, and a rounded breast. Its “legs” were long, the right crossed in front of the left. Two dark craters appeared as its wings, as if it had just landed there and was folding them up. How bizarre. I used my celphone to snap this photo, a bit zoomed in on the phone. 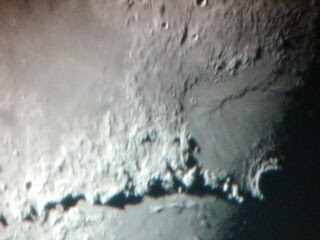 The more I look at the moon the more I see. And since my sketching skills leave so much to be desired I think I’m going to have to get a DSLR, minimum, to better capture these strange sights.
Posted by Mark McCarthy at 10:00 PM