night at the peak

Last night was a public night at Fremont Peak, and since they expected many visitors they sent out a call for volunteers.  I came and supporting using the old orange 16-inch telescope, which is actually a really good scope, though the mount is a little stiff.  Showed the moon, which was in first quarter and to set at 12:30am; Leo Triplet which was a tough object for many but showed up well enough (nice to share some galaxies); M3, M51 in which we could actually see spiral form; and the Turtle Nebula NGC 6210, another challenge object.  As things were wrapping up I suddenly remembered the star hop to Omega Centauri, and was able to find it in the 16-inch -- I needed to sit on the ground to reach the eyepiece, and unfortunately it only looked like a large brown granular smudge.  We looked at it with a couple other scopes.

I stayed late in order to observe with the Challenger, starting around 11:30pm.  I tried to figure out its motions, which are strange in the off-axis mount.  Eventually I picked an area in Serpens which was high enough to be out of much of the haze but not too high that I could still reach it with the ladder.  I star hopped using my atlas and one straight through 80mm finder near the bottom of the scope.  This too was awkward but I got used to it.  I didn't try to use the setting circles -- this will need to wait for another time.

I observed until 3:30am. Seeing was pretty good and it warmed up, so I think I was above an inversion layer. Transparency was still on the poor side, with jets making long silvery vapor trails in their wakes.  SQML was 20.99 after the moon set. 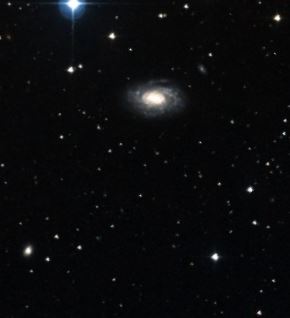 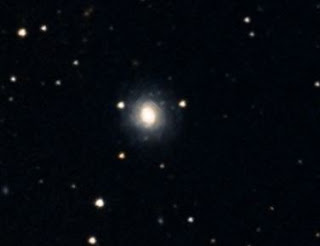 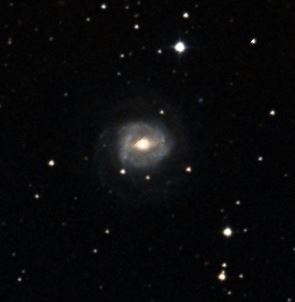 NGC 5936: Moderately large, round diffuse mottled halo, quasi-stellar nucleus flashes with averted vision from the small round core.  With patience I can discern a NE-SW bar and two opposing spiral arms at best moments and with averted vision, at 457x.  Definitely a face-on spiral and an interesting sight.  12.5v, SBb.  DSS shows a lot going on--it is an HII Galaxy, which are dwarf starburst galaxies in the local universe perhaps forming their first generation of stars. 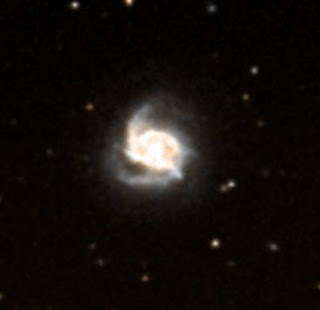 NGC 5951: Nice 6:1 N-S edge on with dusty mottling and a gradually brighter core.  Large and faint; I can see a very faint star superimposed on the southern half of the halo.  There appears to be an extremely faint companion galaxy to the west, an amorphous faint smudge [this seems to be just a grouping of very faint stars on the DSS.] 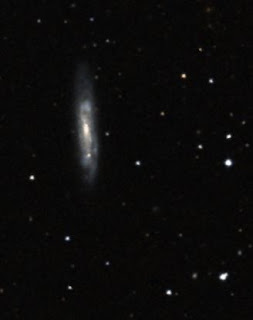 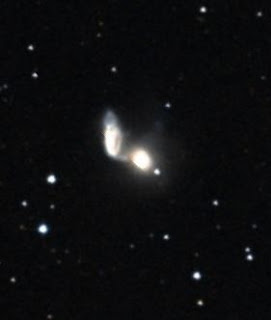 HCG 79 Seyfert's Sextet: Small and tight group, used 457x.  a, b, and c components bright elliptical in appearance and easy; e sometimes appeared with AV tucked just south of b; d was merely sensed, extremely faint. Did not see the tidal tail wing coming off b.

Arp 209 = NGC 6052-1 & -2: Using 457x, it appeared as two small bright very closely separated cores orientated in a line east and west.  The one to the west with a small roundish halo and the other with a N-S elongated halo, which I sensed had a comma shaped sweep headed south then tapering to the west.  Really tough. 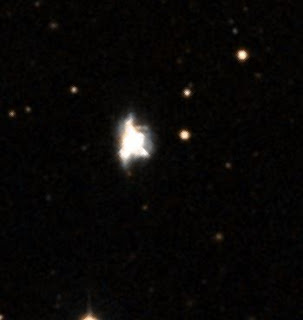 Mu 1 Boo: This star was on my radar because of a cloudynights discussion about 0.1" separation doubles.  I gave it a try, pointing the Challenger at zenith and luckily being able to reach the eyepiece with the ladder pressed against the north pier.  I tried 457x but found it was out of collimation (I had not checked it beforehand) so I adjusted the focuser and tried again.  At 915x I was able to see an airy disk but it was highly diffracted in a very strange pattern.  I could not detect any elongation, let alone a split.
Posted by Mark McCarthy at 5:12 PM