challenges with the challenger

Hungry for some deep sky viewing, I headed up to Fremont Peak Tuesday night 12 December to use the Challenger. I wanted to learn how to set and use the setting circles, and had a list of some objects to find, but no fixed agenda. I arrived at 4:30pm and opened up, setting a fan behind the primary and collimated the focusers, one of which was far off. I read through the user manual for the setting circles and thought I knew how it worked. The sky looked pretty good; a north wind blew away most of the southern California wildfire smoke, and as the satellite predicted there was a bubble of good transparency above.

I went about trying the star alignment. The first star is Polaris, but I could not, for the life of me, get the Challenger to point to it. Challenger is on an English cross axis mount, which means anything viewed along the meridian has an awkward eyepiece position; also the scope movements are not intuitive. I eventually assumed if I just let the scope sit on top of the axis and remain level, it would automatically be pointed to Polaris (or North Celestial Pole, to be precise) – which probably is incorrect but it was the best I could come up with. Then I followed the instructions to align first to Altair and then to Aldebaran. So far so good. I tried to select an object and see if I could move the scope to it, supposing I should watch the screen to see if the coordinates would change as I moved the scope and move to zero – but I could find no such function. I was pretty frustrated and just turned the computer off. I was frustrated too trying to move the scope into a good position to observe, and be able to reach the eyepiece, and to star hop (which was a real challenge). I did eventually find only one intended target, a PN in Cepheus; the rest of the night I poked around in Eridanus since it was a more convenient place to look.

I just hate the mount, it is too difficult to move manually and the eyepiece positions are often inaccessible or uncomfortable. And I can’t figure out the DSC to find things. The scope it too awkward to move for star hopping, and the finders are not conveniently placed. On the plus side: it’s a 30-inch scope, so it shows a lot. The tracking is rock steady; even at 900x everything stayed still. One of the finders is a 6-inch refractor which puts up very beautiful images. It’s in a convenient location, and has an attached room to get warm or take a nap. It’s on a mountain so the sky is not too bad… I want to love this scope but so far it has not won me over. I’m willing to give it more time.

All the same, it was a very good session, with some very “challenging” objects:

It took a long effort to wrestle the Challenger telescope to point to Iota Cephi, then to star hop through the eyepiece at 118x, using a printed finder chart and the telescope’s slow motion control paddle, into the correct position. The target lay to the south of a flattened dipper asterism which arcs above it. No hint of the PN at 281x or 457x; OIII, Hbeta, or UHC filters did not help. As on the finder chart, just north of the PN is an arc of three stars N-S, curved like a parenthesis. The closest and brightest star in this curve is 23” to the north of the PN (as I found later on Aladin). I could see the brighter two stars at 281x and the third, the faintest and furthest north, at 457x with direct vision. Adding a barlow, at 915x, I still had no hint of the PN for about 10 minutes of peering into the eyepiece. Then, while dropping my eye downward, a small, excessively faint grey mass formed itself in the correct position in relation to the arc of stars. I saw it almost without meaning to: after filling my eyes with light then glancing slightly and slowly away, it emerged of its own accord. The PN was very small but slightly larger than the three now somewhat bloated reference curve stars, and I registered the PN had a N-S elongation. Filters had no effect, and in fact the three reference curve stars disappeared in OIII and UHC. The PN was very intermittent and seeing-dependant; over the next 20 minutes I saw it appear 4 times, but palpably enough to convince me of its reality. I did not view a photo in advance, just the AAVSO finder; my field sketch matches the DSS image pretty closely. For now I’ll take this as a marginal observation until I can repeat it. 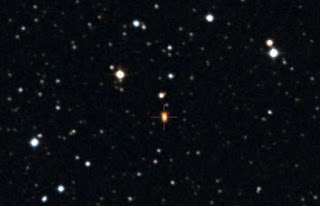 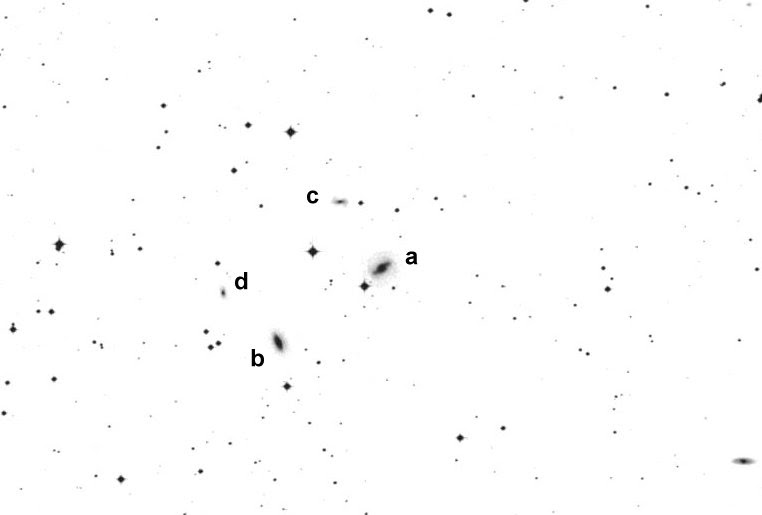 Arp 67 = UGC 00892, irregular galaxy. Faint, small, somewhat distorted, round halo and brighter elongated core with averted vision. I sense some “cometary” haze emerging from the outer SE halo [this appears to be an elongation of the spiral arm] 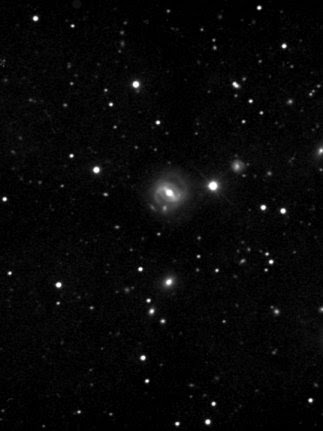 NGC 1653: Round, quasi stellar nucleus, bright round core, diffuse halo. Moderately large and bright. There is a star in the west haze of the halo. E0, 12.0