Finally a clear sky forecasted near a new moon, so I booked the Challenger for Monday night. I arrived at 5:30pm and opened up. I needed to vacuum rodent droppings from the floor (there were a lot behind the mount pier) and clean up. The Challenger's mirror is filthy, with built-up ripples of dirt. It made me angry that it's not really being taken care of -- though it's before the start of public nights so perhaps they'll clean it up later in March.

I started observing once dark, using the 5-inch refractor as a finder scope. I guess I had about a 1.5 degree FOV, and star hopping was arduous. The cross-axis mount was another sore-point. But the main problem was the sky: my SQML didn't get above 20.50 even in the best area of the sky. There was no fog to cover the surrounding cities but there was enough haze to reflect light up into the sky. Seeing was pretty bad too, though it improved through the night. I got tired after a couple hours, and when a couple of new members (imagers) who showed up wanted some views through the scope, I obliged by finding easy Telrad finds, and didn't mind the non-observing time -- I had given up. I've pretty much determined I need a new large aperture deep sky / dark sky scope to satisfy that need for observing. Fremont Peak's sky just isn't good enough. I'll continue to use it for now and try to adapt to its limitations.


Sauer 1 is a small and faint open cluster which Steve brought to my attention. It is part of the Sagittarius Dwarf Spheroidal Galaxy (Sgr dSph) stream. It is composed of mainly 17th and 18th magnitude stars, so nothing much to expect from this than a small glow: "Found correct location with finder charts, noticed non-stellar haze with direct vision but was seeing dependent. Two or three extremely faint stars resolved on the north & west boarder of the haze with averted vision and seeing. Since Steve mentioned they were mainly red giants I used a Wratten #12 yellow filter, which seemed a little better than without. 281x best but also tried 457x." 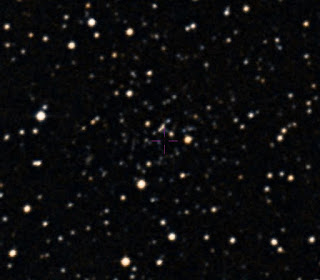 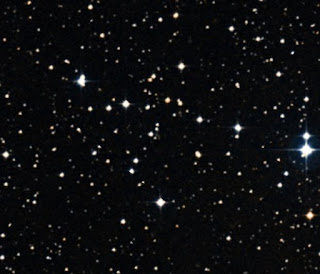 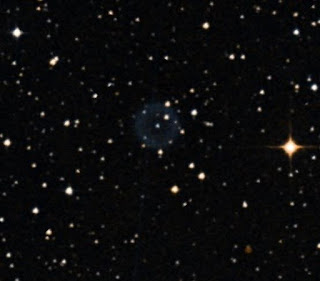 NGC 2346: Bright planetary nebula.  At 281x with OIII filter, the bright central star seems too bloated to be a star -- could be nebula shell or just poor seeing.  Irregular oval shell with mottling, orientated NNW-SSE.  This is a spectacular bipolar in images, but seeing not supporting a better view. 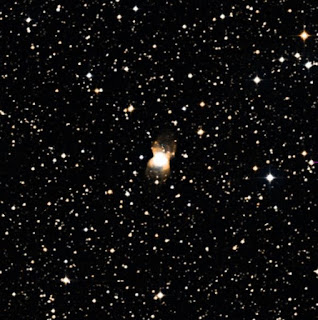 Abell 22: At 281x with OIII filter, it has a green central star and a very large, round, slightly purplish middle bar like structure inside a much larger round shell, mostly evenly lit with a soft but distinct edge. 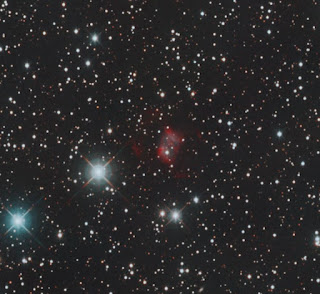 Abell 24: At 281x with OIII filter, the central star blinks and there is a large, round, very faint and diffuse halo. 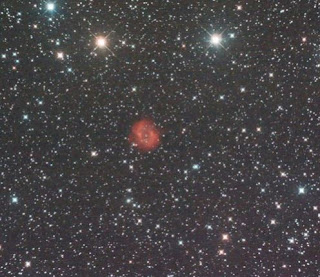 Abell 25: 281x with OIII, a blinking central star with a very faint round halo, pretty tough. 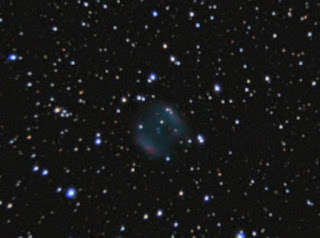 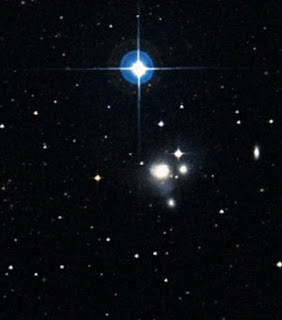 MCG-2-25-17: At 281x, very faint, elongated, E-W, about 3:2, small. [only the central bar and some inner halo ring seen; DSS reveals spiral halo extensions well out from the center] 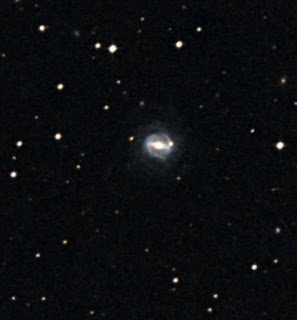 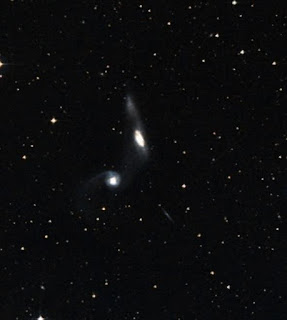 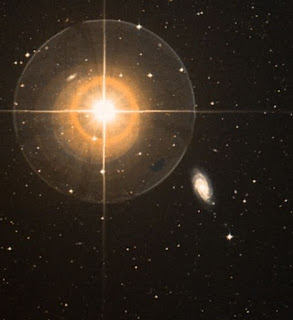 NGC 3242, Jupiter's Ghost: with OIII filter.  Bright, bluish, with central star and inner shell (annulus?) which is compressed and elongated within the larger round shell, which has nice crisp edges. 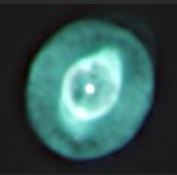 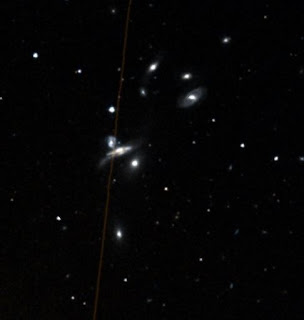 There were several other things I looked at, like the Leo Triplet and M51.  But I looked only briefly and didn't take any notes, since they were for Carlos' benefit, a mini star party just for him.  I had rather given up on observing seriously.

I almost forgot to mention: this was the first light of an 80mm f4 mirror mounted monocular scope I built over the last few weeks (literally pulled off the protective plastic sheet off the mirror before I used it).  It's a simple wooden box painted black (and which Carol and Clara painted with astronomy designs -- making it a bit of folk art).  It could be known as the 80mmMMM.  I have the mirror yoke attached to the box and the box is attached to a tripod, so I can set it at a comfortable angle -- which I did while sitting on the south facing bench in front of the observatory.  I can use 2" eyepieces, so with the 31mm Nagler I get 7.8 degrees TFOV.  It was really a wonderful scope, enjoyable views, with a bit of coma or astigmatism at the edges.  The most memorable view was the open cluster chain of M38 - M36 - M37, all in the same field, with M38 and M37 on either edge.  It looked something like this, though without all the nebulosity.  I look forward to enjoying this scope on my outings, and especially for the next Great Comet: 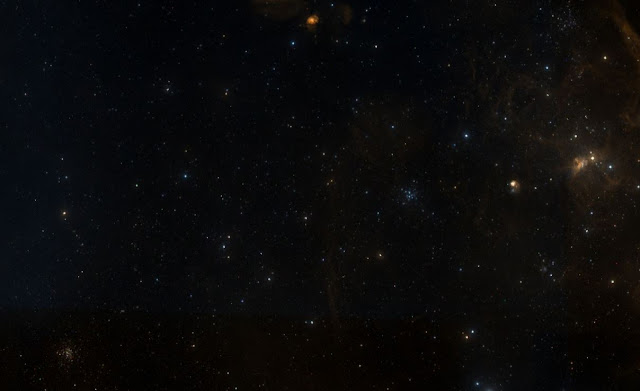 Posted by Mark McCarthy at 9:11 AM