Conditions were better and I felt more relaxed, and I was likely more productive.  Observing without a plan has the charm of finding new discoveries, but one needs a particular frame of mind to keep interest and attention, and to keep the observing pleasurable.  At times I wished I had a plan to keep me more focussed.  I was not over tired and that helped keep me going, though I petered out at around 2:30am.  It would have been nice to keep going since the sky conditions were very good.  Tonight should be the best night yet so I hope to rest up and be able to make the most of it.  I do feel tired this morning and have the beginnings of a sore throat.

As I go through my notes I find I observed some of the same objects twice within this session -- I simply forgot from a few minutes before what I had seen before.

NGC 7013: 205x.  Fairly bright and large, bright small core, elongated 3:1 NNW-ESE, diffuse but mottled halo with fading edges.  Faint star on the NNW tip of the halo.  Faint tumbling satellite passed by in the FOV during the observation, fun to watch it flash and flicker. 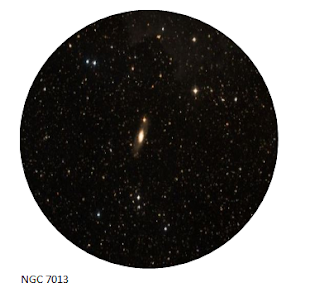 MWP 1: 205x.  Exceedingly faint large shell seen with averted vision & OIII filter only; it hangs from a string of stars like a water drop. Brighter on the SW rim, and barely there through the rest of the shape; seems to have ghostly rings inside the shell?  Edges are soft but not diffuse. A small star is green with the OIII but it is not central to the nebulosity and not clear to me it is a central star.  [According to Kent Wallace in his Visual Observations of Planetary Nebula, it is called the "Methuselah Nebula" due to its age, estimated at 150,000 years, old for a PNe; the shells of most dissipate within 50,000 years.  He also says the first known visual observation of this object was made during 2002 CalStar, probably in the same baseball field I was set up in, also in a 20-inch, and that a certain Jeff Gortatowsky verified the sighting!] 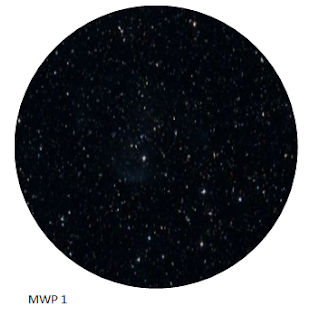 Alves 1 = ALV1 (PN G079.8-10.2): Very marginal observation.  Large amorphous glow in a scattering of stars, irregular shape, very exceedingly faint -- more felt than seen; maybe seen because I thought something should be there.  205x & OIII only.  [Credit for the image, the full version of which also includes MWP 1, is here.] NGC 7037: Poor cluster, arc of stars and a triangle; 205x. [I only noted the ~10 brighter stars; there are fainter stars in the group -- needed to have a wider field to show it separated from the rich field.] 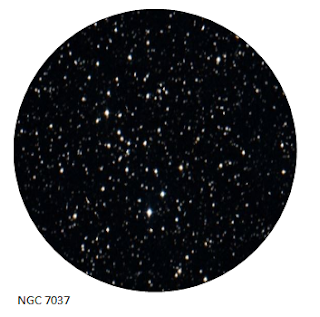 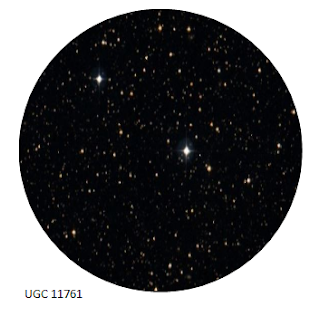 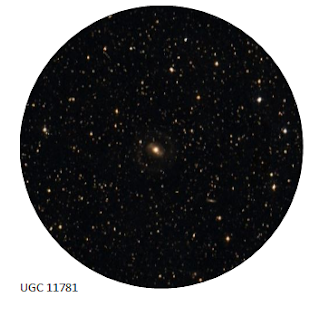 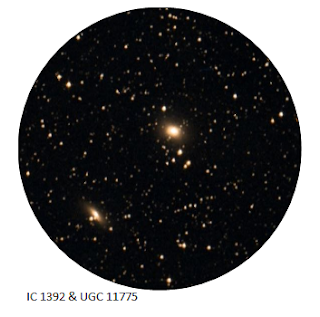 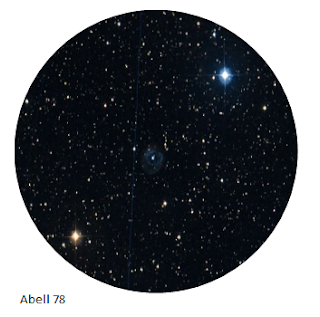 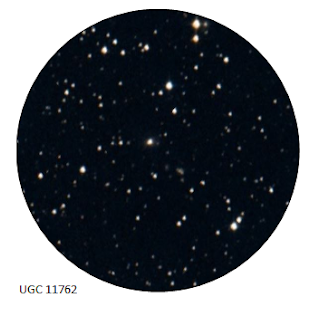 NGC 7116: Averted vision to see but can then hold with direct vision.  Moderately large and fairly faint, 4:1 WNW-ESE halo with a gradually brighter core offset to the NW. 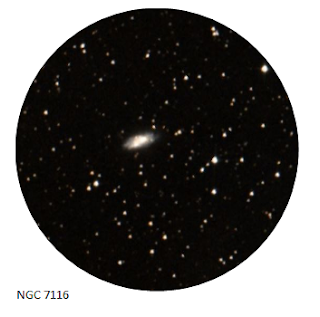 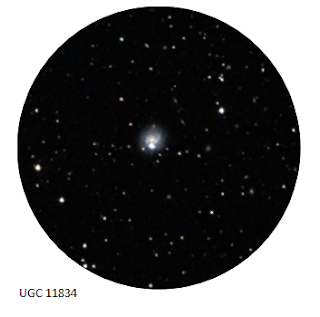 NGC 7137: Halo looks like a stumpy comet tail attached to a faint star attached to the rim and preceding it it to the NW.  The glow is wedge shaped with a uneven surface brightness.  Interesting!   [v12.4, SBc] 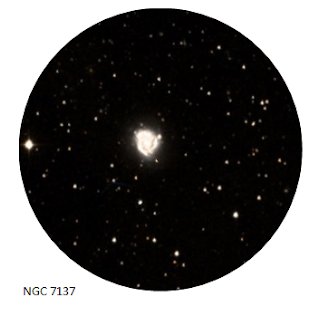 Abell 74: Barest hint of round faint round nebulosity.  Large.  Barely there.  OIII only 205x. 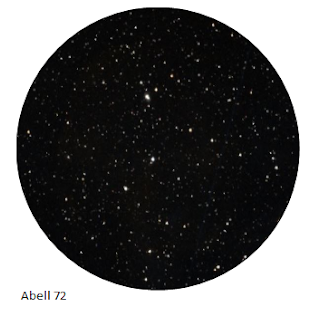 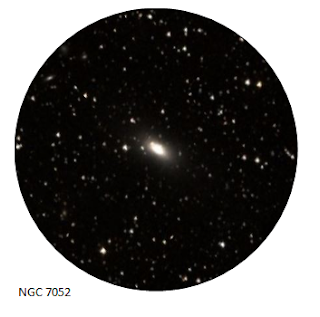 NGC 7080: Rather faint halo, mostly round, fairly small, within a triangle of bright stars.  Interesting curve shape in the halo -- may be barred spiral? [v12.3, SBb] 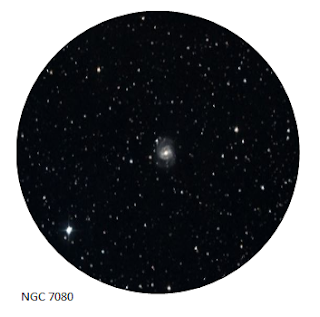 And-G1: I see a faint round haze, rather large, fairly bright (direct vision) at the star hop location -- but I remember reading I should be seeing "Mickey Mouse" ears composed of two stars plus the globular.  So I'm not sure what I saw.

And I = PGC 2666: 4:1 elongated glow, extremely faint.  Used yellow filter which seemed to help a little.  Doubt the observation a little.  [Did not see -- the galaxy is far fainter and more diffuse than described.]

Baade A & B: Two extremely faint, slightly elongated glows, both with stellar nuclei.
Need to find a photo... 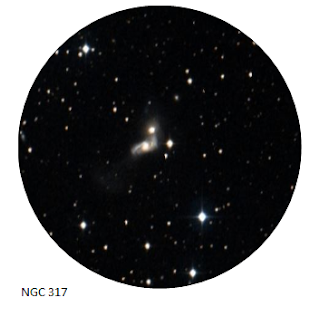 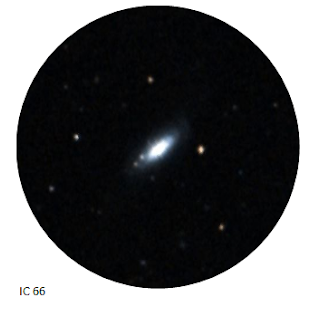 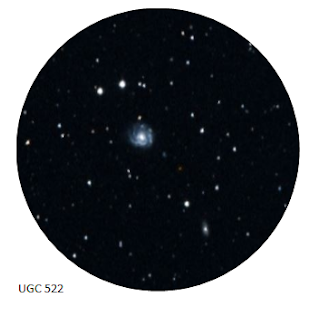 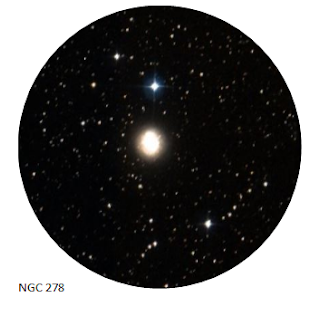 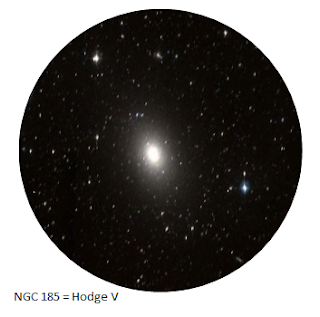 NGC 147: Very large 3:1 NE-SW glow with a gradually brighter core and a central star or stellar nucleus.  I see a dark lane or cut-off running along the SE side.  Quite diffuse and large.  [It is a foreground star in the center of the galaxy.]  205x 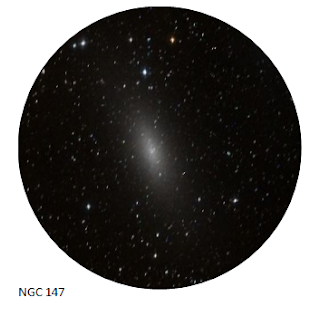 Perseus Cluster: A dozen and more galaxies in each eyepiece view, swarming.  I did not try to sketch or describe, only to take it all in.  After a while of looking into the far distance, I pulled away from the scope, and looked into our own galaxy -- perhaps much like those I had seen at such a great distance.  I was isolated on the field, with its night sounds and wind, but felt what I was seeing, though strange and wondrous, was familiar, and was home.
Posted by Mark McCarthy at 4:18 PM