I arrived Wednesday at around 4:30pm and the temperature was a surprising 95 degrees.  The Bay Area was under a persistent haze of smoke and water vapor, but the sky kept getting more blue as I drove south to Lake San Antonio.  I found a spot next to Steve and began setting up both my 20-inch and my 10-inch Springsonian.

I started out doing the star alignment with the Argo/Servo CAT, but it would not take -- when I tried to find an object it said not aligned.  This happened twice, before I got the message to redo the first step.  Then I was able to land at an object within half a degree -- it was at the edge of a low-power eyepiece.  But then I had the same problems as before: The object would drift out of the eyepiece and when I use the handpad to try to center it, the object would overshoot.  I kept at it for about an hour, trying to get it to work efficiently, but I felt I was losing observing time and eventually I just gave up.  Since the object I wanted would be off the field I still needed charts to find it.  And I had more trouble with the handpad than I did having to bump the scope manually to keep an object in view in an undriven scope.  I'll try again tonight but so far I am not happy with this system!

When I grew frustrated I went over to the 10-inch for some Milky Way scanning, and felt better at the simplicity of using that scope.  Tonight I need to use binoviewers on it.  I went back to the 20-inch and did some deep sky, but it was not satisfying -- transparency was on the poor side -- and switched to doubles instead.  SQM was 21.5 -- hurt by transparency and the Paseo Robles light dome to the south east. Seeing was 6/10 until about 11pm then improved to 7/10 until I stopped observing around 2:30 am.

UGC 12163: This was the galaxy I was looking for last time I was out at Pinnacles when I noticed a double star.  Using 333x the galaxy had a quasi-stellar nucleus (which tipped me off it was a galaxy and not a star) with a very faint small round halo which brightened with averted vision.  It is a Seyfert 1 galaxy, and close-up DSS2 shows a disturbed barred spiral with brightenings on the NW and SE arms -- might both be background objects?   After observing it I went on to the doubles which surround it:

I noticed another double 45" to the direct north of the UGC galaxy, near equal, 13.5" separated PA ESE.  The star to the west is [SRB2001] 3 and to the ESE is not identified in SIMBAD or GAIA, so I can't tell if it might be a physical pair.  SIMBAD says SRB2001 3 is just a star, no note of multiplicity.

I went back to CHE 410 to attempt to see the 5" separated 16th magnitude star I noticed before on the DSS2 -- even though it seems not to be a double.  At 333x I immediately saw the 19" separated 13th magnitude B star flash with averted vision as before, but did not see the 16th mag star -- seeing was flaring the star.  At 667x the 19" B star ceased to be flashing AV only and became a steady DV object.  I had a hint of the 5" separated star, which I felt as a small point brightening in the correct PA about 25% of the time, but don't feel I have a good enough sighting to claim it.  Perhaps seeing will be better tonight. 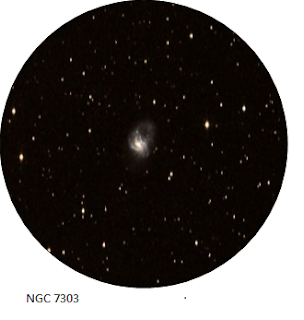 NGC 7292: Diffuse 3:1 with brighter core, but no nucleus -- seems to be a foreground star near where the nucleus would be.  To SW is a group of four 11-12th magnitude stars, three in triangle.  [Saw the foreground star which is not identified in Aladin.]  The halo is larger and rounder in DSS2. 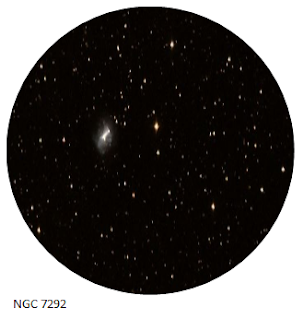 UGC 12011B: Hazy quasi-stellar nucleus, round halo which glows brighter and grows larger with averted vision.  Near an 11th magnitude star 1.7' to the NW.  [This is a pair of galaxies, both Bmag 14, so I am not certain of what I saw.  I did not resolve two nuclei.] 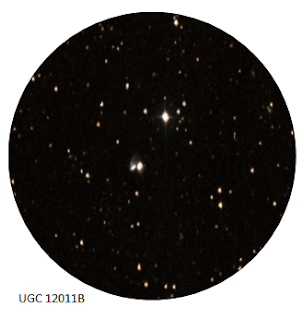 NGC 6837: Very faint, small knot of stars.  Seems not much different than other small clumps around, detached but not much concentrated.  205x [I should have used lower power to set it off from the background more.] 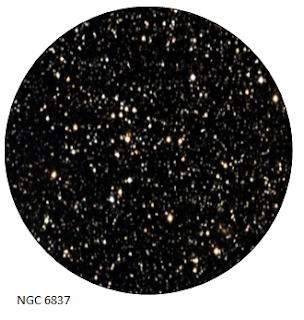 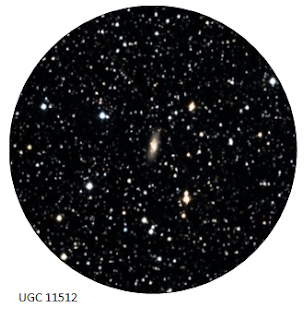 NGC 6840 & 6843: Both open clusters are poor, loose, with some a medium brightness range and not well separated.  Why the NGC designation?  [John Herschel discovered them, but seems they are not true clusters, just some random brighter stars in front of the richer Milky Way background.] 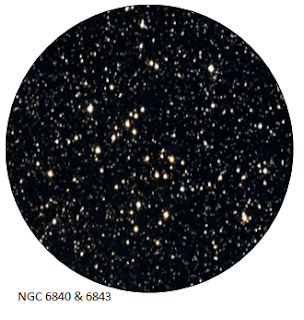 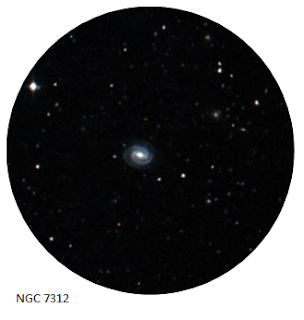 NGC 7374A: My notes say "Oval, very diffuse, gradually brighter to middle" but this is actually a small galaxy with an IC pair -- so not seen, I think. 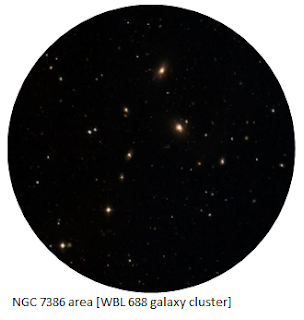 NGC 7479: ! Long bright central bar running N-S then a strong arm sweeping to the west then north in a great mist of halo which grows larger with averted vision.  Eastern arm is much weaker and needs averted vision to see.  There's a faint [v13.1] star just to the north tip of the bar.  The SIMBAD layer in Aladin has an insane number of orange squares, indicating specific objects. 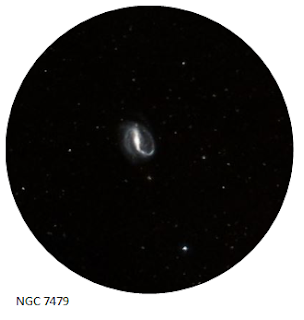