It's been nearly a month since I was able to observe last.  Weather has been consistently cloudy, usually without rain, but enough to put the kabosh on any telescope time.  Tonight was a little exception, and after a long and difficult day at work, I felt the spur to go outside instead of laying on the couch watching youtube.

I brought out my 8-inch f/7.25, which sets up quickly and always put up lovely images.  I used it for the AL carbon star and some of the double star lists.  There was a just past quarter moon up, and a constant flow of haze blown across it from the ocean, and some wisps of clouds making slow sweeps through the sky.  I poked around Orion for a while, changing powers depending on my mood.  It was my first look this season.  M42 at low power, then zooming in on the trapezium, where I could see pin pricks of E & F stars at 184x.  Rigel was at the tip of the meridian tree; with the uppermost branch acting as a apodizing mask, I was able to get A & B.  Pleiades full in the finder.

Then I moved to the moon, again poking around at low power, tracing ray patterns and jagged edges of the basins.  No hurry.  There was an orange star off the dark side, and I thought it might be occulted, so I kept tabs on it for a half hour, but it was too far apart.  Pretty, though.  I decided to remove the moon filter to see if I could find any other stars near the dark limb, so I used the 8mm with a barlow at 368x to view, but found none.  I did notice, though, that the detail on the moon seemed sharper without the filter.  I started panning about enjoying the detail when I came upon Plato.

Seeing was steady enough I ought to try for the craterlets.  To my great surprise, I saw a light colored but very distinct crater near the center.  This is craterlet A.  On the next pass saw a close pair of craterlets, like a double star, to the lower left in the view from the first.  These were C and D.  All the craterlets were seeing dependant, but I could catch them on three out of four passes on the undriven mount.

This was exciting!  I had long thought of going after these, since they are considered a challenge.  I went into the house to grab a finder chart of the craters.  I studied that for a while, then went up to 589x and, with some effort noticed a light colored smear, which after a couple more passes resolved for a moment into a crater -- B!  So now I'm up to four craterlets seen.  I tried pretty hard for a couple more: e seemed a darkening in the notch of the crater rim, but it was too uncertain.  g seemed to be a light smear again, but it was too uncertain.

I was very happy with four, having not expected anything much from the session but casual viewing. 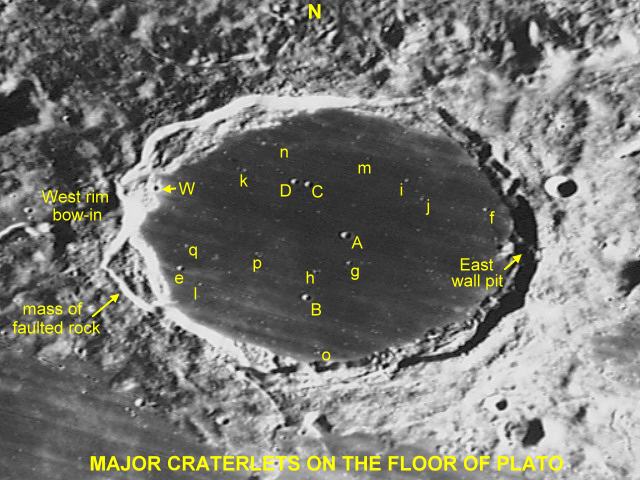 By the way 589x was fairly comfortable.  The scope focused well and the seeing was merely watery.  It's more than 70 times aperture, which is a testament to the mirror's quality -- made by a total amature who learned how to do it reading a book!
Posted by Mark McCarthy at 9:24 PM