A change in our family plans for the weekend opened up an observing window.  High thin haze persisted in the sky all day, matching the satellite images but contrary to the forecast which was for clear skies, above average transparency, and good seeing.  I drove down to Pinnacles Chaparral Trailhead, willing to make the drive even if conditions were poor, just for a break in routine.  Jamie was there.  We had expected more people to come out, it being both a new moon and near the peak of the Perseid meteor shower, but there was no one at the west entrance, and only a couple of photographers down at the trailhead to take wide angle shots of the meteors.  Jamie and I showed some returning hikers Jupiter, Saturn, and as it grew darker the Double-Double, Ring Nebula, M22, and the Swan Nebula.  One of the photographers remarked he didn’t think it was possible to see nebulae visually – he supposes it can only be captured digitally.  It makes me think how people raised only on technology have an incomplete view of the universe; the only way they can see anything is through their electronic device.  And to boot, he and the other photographers had very poor light control – lights flashing every time they opened their cars, white flashlights, glowing camera screens – it was making me frustrated.  They don’t have a clue what dark adaptation is, or what visual astronomy is about.

Having lost hope of maintaining dark adaptation I started out with double stars.  The seeing was only half decent closer to zenith – too much local seeing disturbance from the heat being released by the land.  Eventually I did venture some deep sky work, though SQML didn’t get above 21.1.  I forgot to bring my Argo Navis and ServoCAT hand controller (I gave myself a big dope slap for that), so all was by star hopping and no tracking.  The Perseid meteor shower was out; I noticed quite a few, including four in the span of two seconds, and one bright long one which was tinged with blue and green color.

After a break to perhaps let the seeing settle down, I went back to deep sky,

NGC 6928 & 6930: Needed averted vision to detect 6928 but easily held direct.  It is long, 4:1 N-S, low even surface brightness, tapering tips.  There is a star on the very SW tip.  With longer viewing and more averted vision, the core brightens up like a long sliver in the halo.  [There is a tiny galaxy, LEDA 200365, at the N tip, which was not seen.]  NGC 6930 has a bright stellar nucleus which rides on a bright elongated core; halo 3:1 ESE-WNW.  There is a star directly north of the nucleus on the rim of the halo.  I did not notice small galaxy NGC 6927 which was in the same field to the east. 205x. 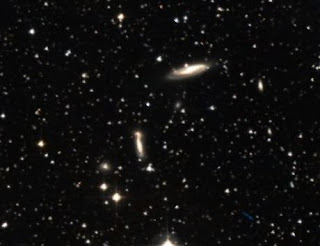 NGC 6934: Bright yellow star preceding the globular cluster, which is bright and pretty well resolved with stars across the core.  Somewhat concentrated center, but overall fairly loose.  Stars are cut off on west side; four brighter star chains extend to the east, making it look somewhat like a crown.  205x. 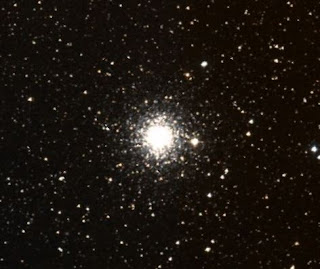 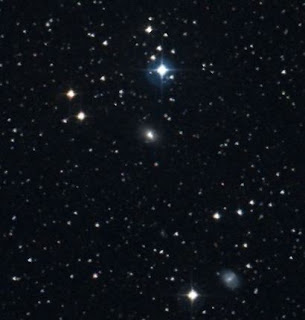 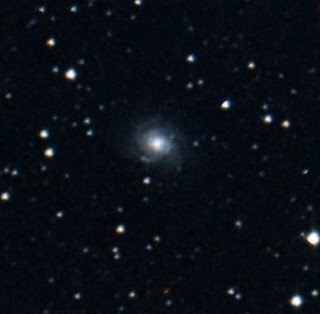 UGC 11639: Bright nucleus with round, very diffuse halo; small and moderately faint.  In a triangle of stars, one of which appears double. 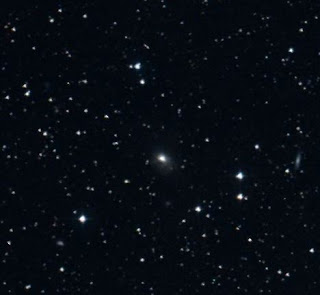 NGC 7332 & 7339: 7339 has a diffuse long 6:1 E-W halo; stellar nucleus flashes with averted vision, along with a moderately brighter core which runs about half of the halo length along the major axis.  NGC 7332 is brighter, very white prominent core and bright nucleus, 3:1 NNW-SSE.  I had the strong sense of two very small non-stellar patches close to the west of 7332 and one larger and more diffuse to the east of it, but do not see these in images; may have been unresolved stars. 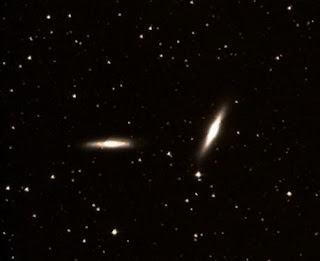 IC 5243 & IC 5242:   Two small, very faint, irregularly round patches at the end of a string of four stars, seem to be interacting; one has a faintly bright nucleus.  With averted vision I see another non-stellar patch, could be other galaxy, to the NE.  [The “two” patches I saw are the single IC 5243 which has a kind of hooked shaped halo.  IC 5242 was one of the faint, averted vision patches I saw.] 205x 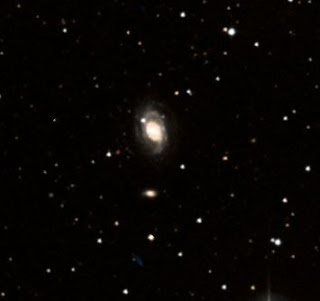 I went in search of galaxy UGC 12163 which was plotted in Interstellarum as lying between two stars in Pegasus.  In my finderscope I selected what I thought were the correct stars, one a very pretty blue-white and the other a light orange, and began searching for the galaxy, using averted vision, since I didn't see any galaxy at first.  The stars formed a gentle arc of three stars with a moderately fainter one making the third, to the east.  As I flashed back and forth with averted vision, I noticed a very faint star appear close in to this third star.  I had the very strong impression it was a double star and wrote in my noted “AV only double!  Blue from faintness.  Separation ~15”, PA ~300-320°, 3-4 delta mag, 205x."

Checking Aladin at home, I find UGC 12163 was between another set of fainter stars 20’ to the NW of where I was looking (upper right in the below image).  I was looking at the string of three stars is to the SW (lower left) in this image (it's nice to note that both strings have nearly identical looking blue-white and orange stars -- a very pretty arrangement).  The star at the east end of the string is the “double” I saw, and is Tyc 2232-332-1.  The star I was seeing pop into view with averted vision measured 18.95” with Aladin.  The SIMBAD links on all these stars have no WDS listing so I couldn't confirm it was double. 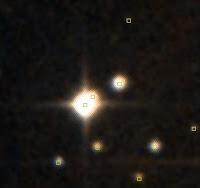 NGC 7303: Very low surface brightness, round to slightly squashed NW-SE, with diffuse edges; some brightening in the core with averted vision.  Very faint equal magnitude double star to the SW. 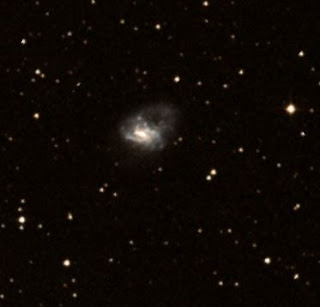 NGC 7292: Core is long and narrow, NW-SE, with the nucleus off-center to the SE [based on the image this could be two superimposed stars rather than a true nucleus].  Halo is diffuse and irregular: fan shaped to the east, less prominent to the west.  Core brightens with averted vision.  A spray of stars, like a poor open cluster, to the northeast. 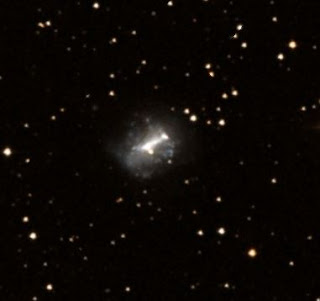 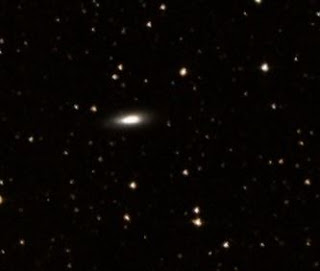 Arp 273: Small formless mass, maybe two galaxies? Averted vision only, no detail, extremely faint.  Northern part of the mass brighter than the other.  Just to west of pretty orange and blue stars. 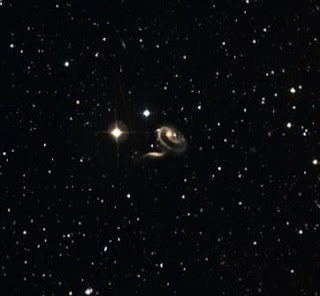 NGC 7673 & 7677: Two galaxies. 7673 is brighter, irregularly round, even surface brightness, to the northeast of a pair of bright white stars.  7677 at the opposite end of the stars and is small, faint, irregular surface brightness, round.  The DSS image shows both have beautiful thin spiral arms stretched out from their bright cores. 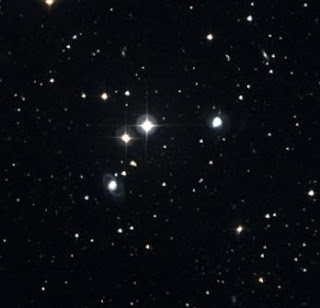 NGC 7678 / Arp 28: Lies in the lower half of a kite asterism of four stars.  Overall bright, irregularly round, diffuse edges.  Stellar nucleus appears with averted vision; the core is bright but heavily mottled, and has a small bar E-W. A heavy spiral arm spins counterclockwise out from the east then turns south then quickly west, with a thick fog of diffuse halo being shed from it to the south.  The northern half of the halo is round with diffuse edge; I had the strong sense some of the halo encroached the upper part of the kite asterism. 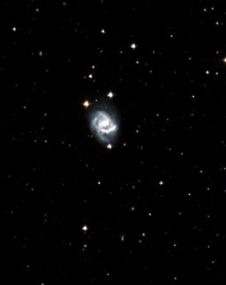