More than a month since my last post; we've had consistently cloudy weather since then.  Last night was the first clear night since then, though transparency was a poor 2/5 with a haze blowing in from the ocean.  Seeing was decent 6-7/10, so I had a satisfying night observing the waxing gibbous moon.

It was a good session mainly because of the 21st Century Atlas of the Moon, which I bought a couple weeks ago.  I have probably 10 books and atlases of the moon, but none of them are convenient to use at the telescope.  This atlas his made of water-resistant paper, and has a spiral binding so it can lay flat in my chart holder.  Best of all, the image scale is well matched to 553x through my 12.5-inch scope, so what I see on the chart matches the eyepiece view.  The photos are based on the LRO and have more detail than I can see, but at least there is enough detail there for me to try to strive to see more.  And, finally, I can identify what I can see, and even crater hop to different targets.  The atlas highlights interesting features on the facing pages of each section, giving me some specific things to look for.  I'm very happy with it.

I spent most of my night around Plato, plate 19.  After a couple of minutes searching, I could see the four main craterlets on Plato.  It wasn't just waiting for the seeing to still, but remembering where they should be and what they should look like.  The Plato Rilles were highlighted in the Atlas as a special feature, so I was able to see two of them, east of the crater especially one long sinuous one.   Next I panned to the Teneriffe Mountains, the peaks of which rise above the Mare Imbrium plain, and the twin peaks of Mt. Pico.  Further away was the tall Mt. Piton, and identical looking craters Piazzi Smyth and Kirch.

Next I came back to the Straight Ridge and then searched for the Maupertuis Rilles.  I remember seeing many forked and short rilles flowing down to the Mare when I looked at the atlas earlier with a magnifying glass.  Now I saw just one prominent rille.  Maupertus crater was rough edged, and four interior peaks were lit in the shadow-filled crater, and looked like a "chicken foot."  There seemed to be many fractures and ridges running in straight lines from the crater toward the area where the rilles were.

Promontorium Laplace was interesting for the long sharp cone shadow it cast beyond a group of four small hills to its west.  Three of these were lit peaks in shadow, but one of them cast another long pointed shadow next to the one from Laplace, forming a sharp double tip to the shadow and strangely terminating at the same "length."

Helicon and Le Verrier were also highlighted.  They looked identical except Le Verrier is supposed to have a lot of ejecta rubble around it; I did not see that clearly, but did notice some softening around it.  I may not have had the right light angle.

I looked for rays around Anaxagoras, but could only see a rimmed crater.  Philolaus was shadowed in, but had a very rough and thick comma shaped mountain ridge trailing away from it.

After resetting my equatorial platform, I looked around Copernicus, plate 22, and immediately noticed domes -- something I did not see before.  These were the Hortensius Domes, and I could see all six including the summit pits on five of them -- old volcanos.  I noticed another, larger dome nearby, Milichius Dome Pi -- much wider and it seemed taller, but with a not very prominent summit pit.  There were some smaller, flatter domes nearby.  North of there I noticed another "face" in the moon: it was a hill feature near a sweeping curve hill, which made it look like an old woman in a hood, with a very short arm pointed toward the Pi dome.  In the below photo it is labeled as a megadome and she is facing up. 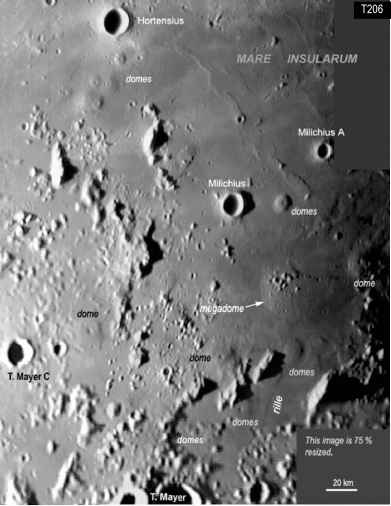 I don't know why I keep seeing faces, animals, etc. in the features on the moon, I suppose it is natural.

So, more of this.  It was really great to get out and try to forget the usual stresses of life with time well spent outside.
Posted by Mark McCarthy at 12:48 PM