I was captivated but Barnard's Photographic Atlas of Selected Regions of the Milky Way this summer, with all its beautiful star clouds and streamers of dark nebulae.  I decided to make my next scope, a short focal length 10-inch, so I could capture some part of such wonderful star-scapes with a wide field of view.

In the book there is a biography of Barnard, who grew up in poverty after his father died.  The author included a photo of him, which moved me: he looks vulnerable, but intelligent, his eyes filled with the wonder of the universe which he must have seen in the dark skies of his rural youth.  I remembered that photo long after I took the book back to the library.  I felt a brotherly solidarity with him; I still feel like a poor boy yearning for discovery.

I happened to receive a year end bonus from my workplace and decided to spend some of it to buy a paperback reprint version of Barnard's great book.  In doing so I thought to search the internet for the photograph of Barnard as a boy, and found it.  I'm posting it here as a keep sake, as it were, to remind me of the humanity of the hobby. 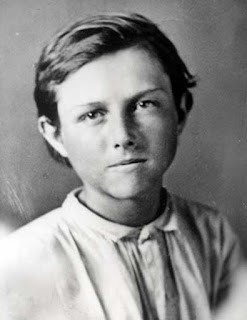